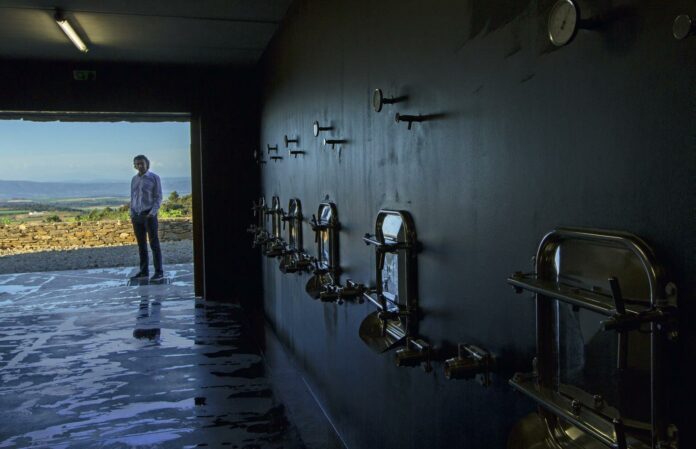 EVEN IF THE SAVOURABLE fly-half turned commentator Pierre Albaladejo defined rugby as a “sport of circumvention”, Gérard Bertrand, who played in third row, has never hesitated to upset the established order. In rugby certainly, in wine surely. Starting out in the Corbières with the fifty hectares of his family’s Villemajou estate, he built a wine empire in the Languedoc, a region that for decades had been looking for a destiny other than that of supplier of big reds to the France of the 19th century and the first half of the following century. He has produced millions of bottles with an impeccably constructed quality-price ratio; he has created brands that have become references on the shelves of specialised and non-specialised shops; he also understood very early on the environmental stakes by developing organic or sulphur-free ranges; he has seized on new trends, such as rosé or today orange wine. But this entrepreneurial spirit has never been disconnected from the man’s winegrowing roots. The two facets of his personality have been superimposed to form a wine heritage of sixteen crus in different terroirs of what he never forgets to call “the largest vineyard in the world”, this Languedoc-Roussillon which actually concentrates 5% of world wine production. Added to this is the third singularity of the character, his environmental convictions. All his wines are now cultivated biodynamically. In this very personal ecosystem, Gérard Bertrand the competitor has always had – and certainly since the beginning – the desire to be part of the hierarchy of great wines. In a world locked by the history of vineyards and the conservatism of many professionals, the challenge was immense. To create a grand cru in recognised terroirs, but for a long time treated well under their potential, this was the Clos d’Ora adventure, in Minervois-Livinière, renewed a few years later by Clos du Temple, a rosé in the Languedoc-Cabrières appellation. These two wines immediately impressed by their respective quality, but also by their price, comparable to that of stars from Bordeaux, Burgundy or the Rhône. The price of a bottle of La Grange des Pères, another emblem of the Languedoc’s exceptional wines, is not as high as that of a bottle of Ora, but the business-friendly nature of the character did not fail to raise questions among the many theorists of small is beautiful. However, Ora and Temple were not born from a marketing plan, but from two terroirs, very early on identified as exceptional. In the 1990s, Gérard Bertrand acquired plots of land on a marl and limestone terroir on the heights of La Livinière, where ancestral vines of Carignan and Grenache were grown. He quickly added Syrah and Mourvèdre, all of which are biodynamically grown. Seventeen years later (!), the first vintage of Clos d’Ora, 2012, was produced. The wine has now found its rhythm, that of a great, deep, Mediterranean red where the Grenache-Syrah-Mourvèdre trio expresses itself with a unique personality that is complemented by a pinch of intense Carignan. Having tasted all the vintages since its inception, one is impressed by its aromatic complexity, but also by the deep, serene balance that emerges from each expression of a harvest: never the slightest weakness in this wine of great ageing, always a diversity of nuances and textures. The Clos du Temple follows the same long-term vision. Bertrand was the first to turn the corner on rosé wine in the Languedoc, and today he is the undisputed standard-bearer in France and abroad. He knows the potential of the schist and limestone terroirs of Cabrières, in the foothills of the Causses, for rosé. He distinguishes a few hectares there, always cultivated biodynamically and ploughed by horse, associates Grenache, Syrah, Mourvèdre, Cinsault with a touch of Viognier, the most aromatic of the white grape varieties, vinifies cold and matures in barrels. Born with the 2018 vintage, Clos du Temple expresses each year the fullness and purity of an extraordinary rosé, both delightful in its extroverted aromatic expression and soothing in its serene and velvety length. Two wines, two experiences, two references.