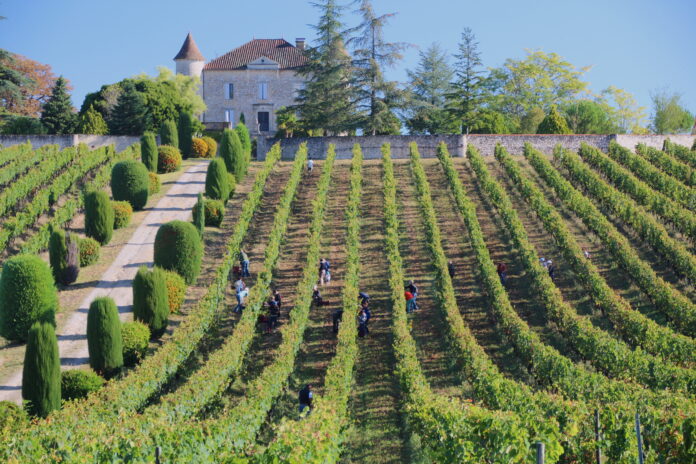 In the 19th century, before the ravages of phylloxera, it covered more than a third of the vineyards of the Gironde and the equally large vineyard of the hills of the Lot. It seems to have struggled to adapt to the obligation of grafting on American wood in France by gradually losing what made its reputation, the intensity of color and aroma in the wine and a velvety texture that made it possible to soften the rigor of the Cabernets and give flesh to the Merlots. Its particular bond with the latter explains its stronger presence on the right bank of the Garonne, particularly in Saint-Emilion and Pomerol. The grafting had also reinforced its natural tendency to coulure during damp or cold blossomings as well as its sensitivity to spring frost. It was therefore gradually removed, especially after the terrible frost of February 1956, but it resisted in Cahors because of a more continental microclimate than in Bordeaux, which favors its maturity while making it more difficult for so-called Bordeaux grape varieties. On the other hand, in Argentina, at the instigation of the governor of Mendoza Pedro Pascual Segura, on the advice of the French agronomist Michel Aimé Pouget who had imported it from Saint-Emilion around 1865 and in front of the declared superiority of the wines produced compared to those of the criollas planted by the Spanish conquistadors, it gradually conquered the whole region, on its own roots, on sandy soils, without the presence of phylloxera. The French experts consulted by the local authorities were also the first to realize its capacity to give more complex wines at higher altitude, on the foothills of the Andean mountains. It was therefore Argentina that would make it better known around the world by the quality and volume of the wines produced, with more than 16,000 hectares planted. To the point where we often forget its French origin outside of France. A little late, but better that than never, the winemakers of Cahors are regaining their pride and no longer hide the presence or the name of their main grape variety, devalued in Bordeaux – this has fortunately started to change recently -, but only a fraction of 4,000 hectares planted reach the level and reputation of the best Argentinian or even Chilean wines.

If I haven’t said its name so far, it’s because science names it differently from commercial uses. Before its introduction to Bordeaux, it was called Auxerrois in the Lot, where it seems to have been planted long before the 16th century. Two hypotheses explain this name, the first, local, makes it the result of the sound and spelling fading down of Haute-Serre, a prefered land for the Causse Cadurcien. The second, which is widely preferred by experts, is easily understood by the presence of Burgundian monks in the vineyards of the South-West and especially by the import of this grape, this time under the name of Cesar, to the gates of Auxerre. In Bordeaux, it takes two names: on the right bank, it is called Noir de Pressac, because of the color of its wine (of course coming from ungrafted vines) and perhaps of the role of the Château de Pressac in its distribution. On the left bank, it quickly took the name of Malbec, under which it will henceforth be universally known, either because birds do not like its skin, or in connection with a winemaker of the same name, Malbec being rather widespread in the region. However, for an agronomist, it will always bear the name of Cot under which we continue to call it in the Loire. The cotoid family is certainly a localized adaptation in the South-West of vitis vinifera. A grape variety very similar in appearance and called Prunelard has existed for many centuries in Gaillac. It had gradually disappeared, but the quality of its wine encouraged young local winemakers to replant it again. Especially since the latest discoveries in genetic analysis of Malbec make Prunelard one of its two parents. The second being the very rare Magdeleine des Charentes grape variety, one of the two progenitors of Merlot, surprisingly enough! There are even some common elements between Prunelard and Pinot noir. The reconstruction by genetic analysis of the complex puzzle of our French grape varieties is becoming more and more fascinating and shows that there is no coincidence in the choice of the grape varieties planted, the compatibility and the complementarity of their wines.

Modern Malbec is therefore divided into two large families. The vines of old varieties concentrate on the Andean sandstones, well exceeding 1,000 meters in altitude, the juice of their berries, provided the necessary irrigation is mastered due to the absence of summer rains. The more stony soils and the richest in trace elements give wines of rare coloring intensity, of an astonishing richness of constitution which can lead to an excessively high level of alcohol (15 ° or more) and to a sweetness in the taste which will please some and displease others. The winemaker’s skill and personal taste will determine the desired balance. On richer and more irrigated soils, wines from this type of vines very quickly lose their character. In France, in my opinion, the question of the most suitable rootstock (s) has not really been resolved, for lack of financial resources for research or, unfortunately, of will and lack of ambition in an inter-profession seeking more yield than quality. But there are one or two high quality clones, such as the 594 clone, and especially a few old vines in the Lot which allow the idealistic winemaker to make interesting mass selections. It is then necessary to adopt a demanding viticulture to combat the vigor of the young vines and above all to allow them rooting and nutrition capable of expressing the full potential of the soil. The gravel of the Lot’s best alluvial terraces, the limestone of the sectors called siderolitics (in reference to the ferruginous red of the soils) or the limestones of Bourgeais-Blayais give balances different from those of South America: a little less alcohol (but often 14 ° anyway), a little less blackness in the colour (except if the musts are heated to produce a “black” wine), a little more freshness in the floral aromas of violets and, in my opinion, more complexity with aging in the integration of tannin into the texture of the wine. In northern areas such as Touraine, the Cot loses its velvety texture and a little of its persistence, but becomes easier to drink and enjoy immediately, which explains its growing success. In Irancy, the Cesar is very rare (much less than 10% of the grape planting), but when it is added in sufficient proportion to the Pinot Noir grapes, the wine undoubtedly gains in richness of  substance and in longevity. The same compatibility exists with Merlot in Bordeaux and I hope that some courageous winegrowers will understand it. I would also like Cahors to introduce Cabernet Franc which, on certain soils and certain exposures, should be a better companion for Malbec than Merlot and Tannat, authorized since the creation of the Appellation decree. Very small productions of Malbec are multiplying in North America, Central Europe, Italy, South Africa and Australia. The future should give us other approaches and nuances than those we already know and appreciate.

The genious of Pinot Noir