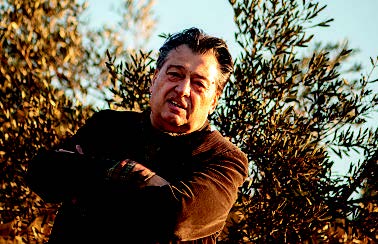 Wine is a family affair, as everyone knows. It’s either chaotic or very well done. With them, it works

It was not until 1982 that Jean-Luc Colombo and his wife Anne settled in Cornas. They set up a pharmacy and then an oenology consulting laboratory. For a long time, it was this consulting activity alone that made them known to professionals in the region. Their skills were soon put to use in their own wines. The first plot was bought in 1986. Old vines that gave birth to the first cuvée, Les Ruchets, in 1987. This was followed by La Louvée until the very last Vallon de l’Aigle, first vintage in 2005. Today, the family business covers ten hectares in Cornas, not forgetting three hectares in the neighbouring cru of Saint-Péray and four hectares in the Mediterranean IGP on the Côte Bleue, a tribute from Jean-Luc to his origins in Marseille. Both trained oenologists, Jean-Luc and Anne have always been extremely rigorous in the elaboration of their wines, in a region where for a long time people were modestly referring to “old-fashioned vinification”, not always free from sometimes major deviations, due to regularly poor cellar hygiene. When they acquired their first vines, then their house in the heart of the hillside, at Eygas, in 1993, it was with the greatest care and the most respectful cultural practices that they shaped their vineyard. At the time, certifications were not in fashion (since 2015-2016 all the wines of the domain are certified organic) and this appellation lacked media coverage. The Colombos stood out for their innovative and original communication. Today, we would call it a disruptive approach. It is ideal for making a name for oneself, very quickly. From the outset, they discarded the traditional Rhone bottle with its drooping shoulders, and adopted the Bordeaux bottle. Shocking for the region, but modern when you know that it has since been adopted by all the great vineyards elsewhere in the world. They are learning to master the codes of communication by bringing in each year journalists and tasters to present their activities, their projects and to follow their evolution. To take stock of these muscular and fruity expressions of this vibrant Cornas hillside, three decades later. To share their know-how. TAKING OVER Their only daughter, Laure, made her first wine in 2010. Not easy to make a name for yourself. Especially with a father with such a strong character, especially when you have inherited it from him. In Cornas, storms rise quickly. Not only in the sky. Father and daughter know how to find a way to move forward, especially as they often share the same line of flight, the same horizon, in the distance. Laure has a solid technical training, BTS and DNO, completed by a passage in one of the best business schools in France (Edhec). Her parents live in Cornas. Very well. She settles in the neighbouring town of Saint-Péray, neither too close nor too far. With her partner, she created her own adventure, the Domaine de Lorient. Her vines, her animals, her guest rooms. A grapegrower’s farm where she can give free rein to her experiments and her desires of the moment. The whole Colombo family can be found in the large cellar, built at the bottom of the hillside, in Cornas, the headquarters of all the projects: the Colombo estate (Jean-Luc and Anne’s), the Lorient estate, but also the wine merchant’s business, which alone weighs nearly one million bottles. In short, there is no lack of work. Two generations are not too many.

The Colombos the father, the mother and the daughter

The world according to Joseph