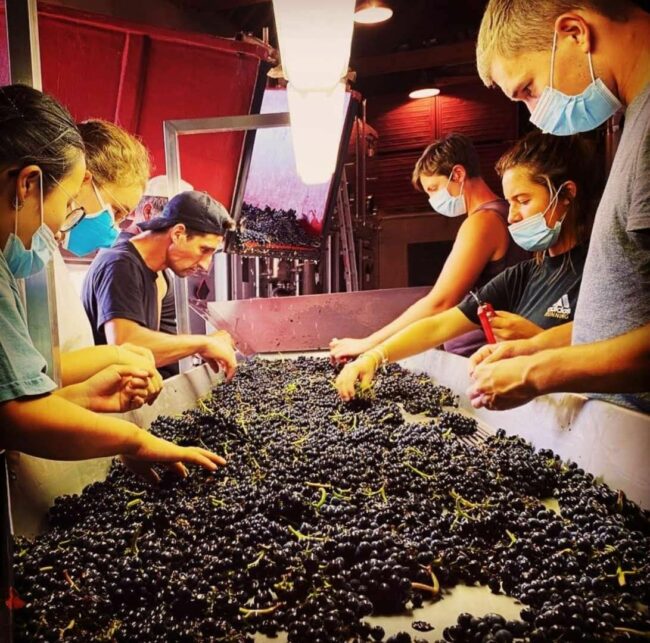 Most precocious ever since the French Revolution

On the day of 1st September, harvesting is finished or nearly so in Champagne, Burgundy from Chablis to Beaujolais and Provence for the whites and roses. The whites of Bordeaux are only just starting as are the reds from the Loire, the Rieslings from Alsace, the wines from Rhone, Loire and the South West. They will continue throughout the month of September. It is possible to already analyse the sectors that are harvested. These sectors are certainly the most precocious since the French Revolution and this increased the difficulties as well as the hopes to produce a great wine.

Confined in the sun

This extraordinary precociousness is not due to the heatwave temperatures of end of July and August, but to the heat and sunshine that sped up the flowering and arrival of the grapes, except for the last rather cool days that brought on millerandage and even here or there run-out, on a rather generous potential yield, generally speaking. Gironde and the South West did not lack of rain and did not suffer too much of the August heat wave. The Eastern vines, however, after having barely avoided the spring frosts had an exceptionally dry end of spring and summer, nearly twelve weeks without a drop of water and a few spikes of heat wave, reaching 40C, that sadly burned leaves here and there, accentuated by the sulphur treatments to avoid powdery mildew, followed by the overheating of the grapes, too exposed to the sun and not well protected by the falling of the leaves.

The puzzling choice of the right date

One will find in a same row, the day before the start of harvest, small not-so-ripe grapes, some perfect grapes, some burnt grapes or rotten grapes, some very tasty, others hardly. In these conditions, finding the right date to start harvesting, with also the sanitary and technical difficulties of a precocious harvest within the constraints due to COVID, was for everyone a puzzle never seen before. This is in no way an excuse for the hasty starts as regards Chardonnays in Champagne or Burgundy, relatively late compared to pinot noirs, which might give wines adapted to modern taste,  but in no way worthy of the terroirs’ and vintage’s potential. On Saturdays 22 and 29 August, there were benevolent rains for those brave growers who were waiting for a more complete maturity and therefore obtained a marvellous harvest, if they are able to sort the 10 or 20% of less perfect grapes, but without rot. In the Beaujolais crus, the growers were generally more reasonable, they harvested, from the 23rd and, mainly, the 27th August, marvellous grapes, sometimes a bit too rich in natural sugar, even if the vinification in whole clusters will surely reduce the final degree.

Everywhere, from Champagne to the surroundings of Lyon, one can hope to get outstanding wines from these grapes. For the roses and whites from Provence, the harvest was plentiful, healthy, and not as badly hurt by overheating as 400km further north. Acidity is balanced, malic acid nearly inexistent and tartaric acid, sign of health and longevity, high. One can debate for years about the Champagne authorities limiting the yield to 7,000 kilos per hectare, under the pretence of decreasing sales projections, all the while allowing growers to buy 15% of their harvest (usually limited to 5%) instead of allowing all to harvest the remarkable 9,000kg that the year offered. Let us remember that in the past, next to 20,000 hectares were reached, with not an ounce of shame or remorse. For the rest of France, let us wait for the 15th September.