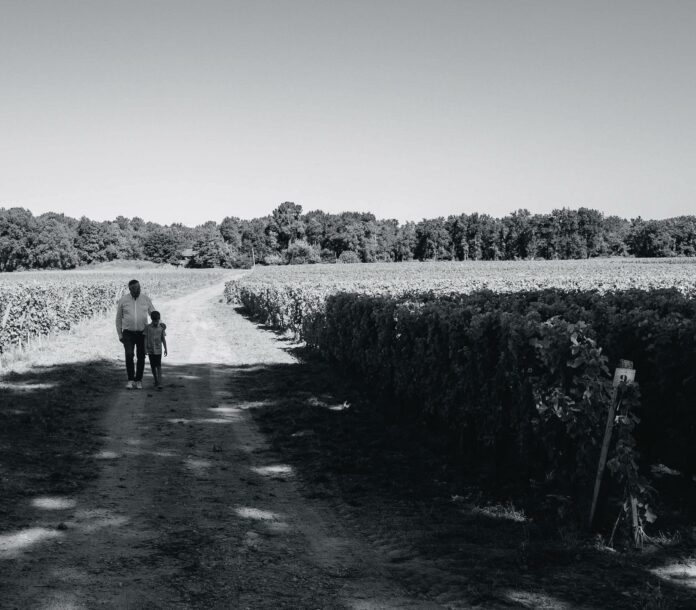 If the centre of the world, of his own world, is his native village in Alsace, Joseph Helfrich knows no geographical or gustatory boundaries. He is everywhere. We put the man and his wines through the tasting scanner.

JOSEPH HELFRICH is a unique case in the French wine industry, and even worldwide. At an age when most of his fellow citizens are enjoying a quiet retirement, he is carrying out one project after another, making acquisitions and restructuring, with the help of his entire family, wife and children, as well as extremely efficient and committed teams. Unknown to the general public, this Alsatian began his entrepreneurial journey at the end of the 1970s by creating Les Grands Chais de France in his village of Petersbach, a group that gradually conquered market shares throughout Europe, and then in the rest of the world, with accessible wines of which the J.P. Chenet brand, with its sloping neck, remains the standard. For a long time, this brilliant success did not arouse the interest of oenophiles, nor that of the establishment of the great estates and houses. Things have changed. Until recently, France’s wine industry was split in two: volume on one side, quality on the other. Since the beginning of this century, these psychological as well as economic frontiers have melted away and many of the producers of high quality wines are also present on the shelves of supermarkets with very widely distributed cuvees. And conversely, Joseph Helfrich is a striking example. He has built this upward trend in his own relentless, methodical and constantly improving way. From 2002, when he acquired the Savagny estate in the Jura, to the recent consecration of the management of Château du Tertre, a classified growth in Margaux, which was entrusted to him in 2020, Joseph Helfrich has constantly invested in vineyards, starting with appellations or regions that were more promising than prestigious, then taking an interest in increasingly emblematic growths, and today has an array of twenty-four estates and houses that has hardly any equivalent in the whole of France, apart from Champagne. This hard worker was not satisfied with just acquiring. In each of these estates, he has analysed the flaws and has never hesitated to restructure the vineyards, the vinification and even the conception of the wines. Having tasted the entire production for several years with this omnipresent boss and his teams, I have been able to judge the extent to which the will to progress is constant, shared and impressive in the group. Now united under the signature “Famille Helfrich” (1), these different wines each in their own way embody the incredible variety of French wine production as well as a true idea of the winegrowing requirement. Here we have analysed some of the astonishing treasures of this France of Joseph that is being revealed today.

(1) Except for Château du Tertre, managed by Joseph Helfrich but owned by an insurance group.

CHÂTEAU DU TERTRE, MARGAUX Fifty hectares in Margaux (more precisely in the commune of Arsac), a classified growth in 1855, brilliantly put back on the road by the previous owner (the Albada Jelgersma family, who still own Giscours), Château du Tertre sounds like a consecration for Joseph Helfrich, who has been entrusted with the management of the estate, for a minimum of 25 years, by the insurance group that acquired it in January 2021. The potential of Le Tertre, long hidden by Giscours, is real: as its name suggests, a large part of this single vineyard is situated on a splendid gravelly knoll. The grape varieties are more diversified than in many Médoc crus, with Cabernet Sauvignon and Merlot of course, but also Petit Verdot and especially Cabernet Franc, which has reached 15-20% in the Grand Vin blends in recent vintages. If the selections of great wine succeed in concentrating on this croup, the Tertre could well be one of the stars of Margaux in the next few years. Finally, the vineyard produces one of the most astonishing and successful whites in Bordeaux, combining Gros Manseng, Sauvignon, Viognier and Chardonnay. It must be discovered. Helfrich, present in the Médoc for fifteen years (Lestage Simon, Le Cartillon, La Fortune) plays a very sensitive card here.

Château du Tertre 2018 40% Cabernet-Sauvignon, 30% Merlot, 16% Cabernet Franc, 14% Petit Verdot. Full-bodied, quite supple and round, with a fleshy rather than energetic dimension. 93

Château du Tertre 2019 54% Cabernet Sauvignon, 27% Merlot, 13% Franc, 6% Petit Verdot. Full-bodied and sappy with freshness, the wine is interesting and fragrant, just limited by a small deficit of depth compared to the greatest of the appellation. 94

CHÂTEAU SAINT-ROBERT, GRAVES The terroirs of the southern Graves, close to the Sauternes region, have long had recognised potential for both white and red wines, but the relative commercial sluggishness of the Graves appellation has limited their development at the highest level. Long owned by Crédit Foncier, Saint-Robert will perhaps finally experience a deserved breakthrough with its takeover by Joseph Helfrich. In white as in red, the best selections are assembled under the name of Poncet Deville. Currently the white is very convincing, the red has progressed spectacularly in 2020.

CHÂTEAU BASTOR-LAMONTAGNE, SAUTERNES This classic Preignac cru, which for a long time – like Saint-Robert – was owned by Crédit Foncier, is based on a very homogeneous 45-hectare vineyard on a gravelly soil. Managed for nearly thirty years by the competent Michel Garat, the vineyard has been well kept and has always shown great consistency in quality. It is certainly a safe bet for sweet wines.

CLOS BEAUREGARD, POMEROL A six-hectare Pomerol cru, Clos Beauregard is located in the Toulifaut district, south of Château Beauregard and west of the Figeac vineyard. The terroir is sand and iron dross, the grape varieties are mainly Merlot, with a good third of Cabernet Franc, and the property, acquired in 2011, is beginning to find its stride.

Clos Beauregard 2018 Fresh, rich, generous and intense, in a more massive and demonstrative style than the following vintage. 91

CHÂTEAU CANTIN, SAINT-ÉMILION GRAND CRU Saint-Christophe-des-Bardes, at the north-east exit of Saint-Émilion, marks the beginning of an important, little-known and yet ancient part of the Saint-Émilion vineyard. The famous limestone plateau continues here, intertwined with more sandy or clayey areas. The sector was soon invested by important properties, sometimes of noble origin, sometimes ecclesiastical. This is the case of Cantin, sold as national property during the Revolution, and taken over much later – in 2007 – by Helfrich. With 38 hectares, the vineyard has a solid and intense profile, with a tannic structure that has been refined in recent vintages

CHÂTEAU DE FESLES This emblematic wine of Bonnezeaux has a long and rich history, marked among other things by its acquisition by the famous pastry chef Gaston Lenôtre in the early 1990s. Around the splendid château and its park, built in the 18th century, the hillsides are planted with Chenin, which is very sensitive to the development of botrytis thanks to the fog of the Layon river. The cru has had its legendary vintages, from 1929 to 2005, via 1959 and 1989, and its periods of decline too. Helfrich took it over in 2008 and serenely restored it, also developing dry wines in the Anjou appellation, white and red.

CHÂTEAU DU CLÉRAY Here too, Joseph Helfrich has acquired a house (Sauvion) and an estate that has long been a major ambassador for its region. Château du Cléray, with its 95 hectares in the heart of the Muscadet-Sèvre-et-Maine appellation, is run by Pierre-Jean Sauvion, who also oversees the oenology of most of the group’s Loire wines. The estate produces archetypal, straight and complete Muscadets, which are undoubtedly benchmarks for the appellation.

MAISON KLIPFEL AND DOMAINE ANDRÉ LORENTZ In his native region, Joseph Helfrich has of course been present for several decades, notably with the Arthur Metz brand, a leader in the Alsace crémant sector. Helfrich acquired Klipfel and the André Lorentz estate in 2016: two properties closely linked since André Lorentz had married the heiress of the Klipfel house, which he then managed. Based in Barr, the two entities each own a vineyard of about thirty hectares around the village and in particular on the famous grand cru Kirchberg, including the monopoly Clos Zisser. The potential is there, the vineyards are in organic conversion, we are waiting quietly.

DOMAINE DE SAVAGNY Forty-five hectares of vineyards in the Côtes-du-Jura, Star and especially Chateau-Chalon regions, the domaine de Savagny is a Jura treasure. It was the family’s first acquisition in 2002, marking a particular attachment to a region where the Grands Chais de France group is now by far the leading operator and where it has created the largest ageing cellar for vins jaunes. Here too, Joseph Helfrich’s teams have perfectly respected the singularity and character of the wines and vineyards, which have appeared to be flawless in recent years.

DOMAINE MICHAUT This small estate of 6.5 hectares allows Joseph Helfrich to enter Chablis. This is no mean feat, given that the appellation and its wines are now among the leading French vineyards on the international scene. Here too, serious work that respects the terroirs augurs well for the future.

CHARTRON ET TRÉBUCHET In the summer of 2016, to everyone’s surprise, Joseph Helfrich took over the assets of Maison Béjot, which had been put in a bad way by its previous owner. Discreetly, the company had established itself as a key player in Burgundy, with houses (Chartron et Trébuchet, Moillard, Martenot), farms and estates (Marguerite Carillon, 27 hectares in the Côte de Beaune). It is still too early to assess this acquisition, which is certainly a major one, but which also requires a profound restructuring. Chartron et Trébuchet (today unrelated to the Domaine Jean Chartron in Puligny) specialises as its founders intended in the whites of the Côte de Beaune.

CHATEAU BELLES-EAUX, LANGUEDOC-PÉZENAS Once owned by the Axa Millésimes group (Pichon Longueville, Suduiraut, etc.), Belles Eaux has a hundred hectares of vines planted on the very interesting Villafranchian terroirs of the northern sectors of the Pézenas appellation. The estate has been extensively restructured and can certainly go even further in the complexity and expression of the terroir.

DOMAINE DE THOLOMIÈS, MINERVOIS Tholomiès is a large, classic Minervois property, which has long been divided between varietal wines, in the flatter part of the property, and appellation wines. When Joseph Helfrich acquired the property at the beginning of the last decade, he immediately cleared a beautiful south-facing slope. The planted vines, which are still very young, should soon be able to enter the composition of Minervois-la-Livinière and take it to another level, as the cru can certainly impose itself as a great of the sector.

Minervois-la-Livinière 2018 A great, stylish wine with a deep, smooth finish and complex flavour. 92

DOMAINE DE LA BAUME, IGP PAYS-D’OC This ancient and very large property located between Béziers and Pézenas has been at the heart of the Languedoc operation of the Grands Chais de France group since 2003. In this terroir dedicated to varietal wines, the La Baume teams have gradually refined the definition of the wines and today produce some of the best Languedoc expressions of classic grape varieties such as Chardonnays, Sauvignon, Syrah, Cabernet Sauvignon and even Petit Verdot. It was certainly here that the group took the turn towards estate wines, and it is certainly here that they experiment, reflect and constantly improve their work.

CHÂTEAU DES JAUME, MAURY A small property with great potential: located in the Maury appellation but vinified in dry conditions, Château des Jaume has marked its difference since its acquisition by the group. Intense, straightforward and complete, it is certainly already a safe bet. The Côtes du Roussillon are for the moment a tone below.

The Colombos the father, the mother and the daughter

The world according to Joseph