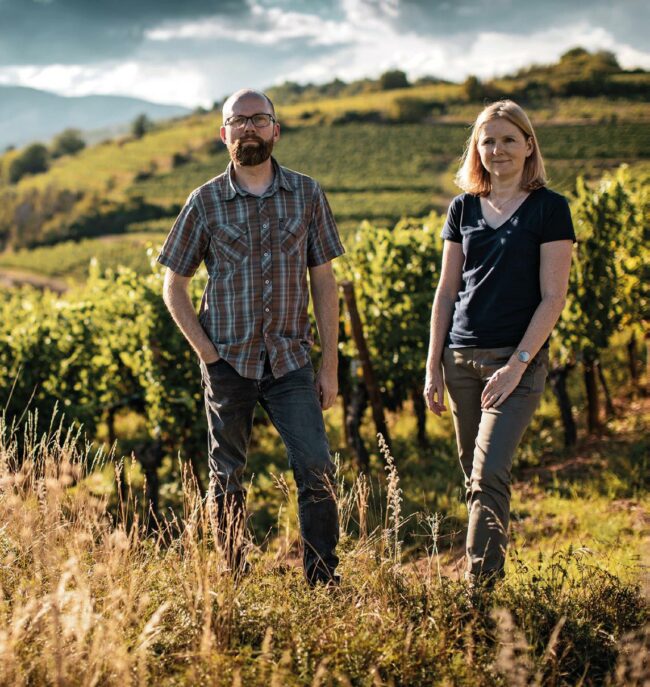 With its terraces, pebble soils and sunny terroir, Clos Saint-Landelin looks like a Côte-Rôtie vineyard. In the heart of Alsace, the eleventh generation of the Muré family is dedicated to the vineyard in a monastic manner.

On the wall next to the hillside, the name of a vineyard is painted in black letters. The inspiration borrowed from the Rhone vineyard is assumed. “As in Hermitage, our grandfather wrote the name of the Clos on the wall. “And as on the famous hill, it is not a trick. The Saint Landelin has something legendary that deserves a little theatricality. Between its walls, a twelve hectare vineyard, a cliff, a small forest, shrubs, a thousand year old history and the beating heart of Véronique and Thomas Muré. “The terroir is spectacular, but hard to work, everything is in terraces.” There are sixty of them, suspended on a 150 metre high slope facing South and hit by the sun at the slightest clearing. Situated to the South of the Vorbourg, a 73 hectare marl-limestone Grand Cru spread between Rouffach and Westhalten, this single vineyard has the particularity of being very stony. Impeccably maintained, the Landelin terraces are home to Rieslings and Sylvaners in their lower parts, Gewurztraminers and Muscats in the centre, while the top of the hillside is dedicated to Pinots, grey and black, “where the layer of topsoil is thinner and the soil clayey, rich in iron.” Organic farming since the 1990s, Domaine Muré is now run on a biodynamic basis. “We were interested in the philosophy, but we wanted to go gradually. We did some trials before being certified in 2013. What is important is also the density of planting. Almost the entire vineyard is planted at 10,000 vines per hectare. This density forces the vine to go deep into the soil to find a constant supply of water even during droughts,” explains Thomas. The question of climate change has not been brushed aside. In Alsace too, they are anticipating. “We have planted a little Syrah, in a spirit of research. If global warming intensifies, we will be happy to have done these trials. In viticulture, experimenting is just one occasion a year.” The wines produced in this vineyard all have depth and intensity in common, without conceding anything to the elegance and freshness of the fruit, which is remarkable in the dry wines and grandiose in the sweet wines, late harvested or produced from the selection of noble grapes, when the vintage allows it.