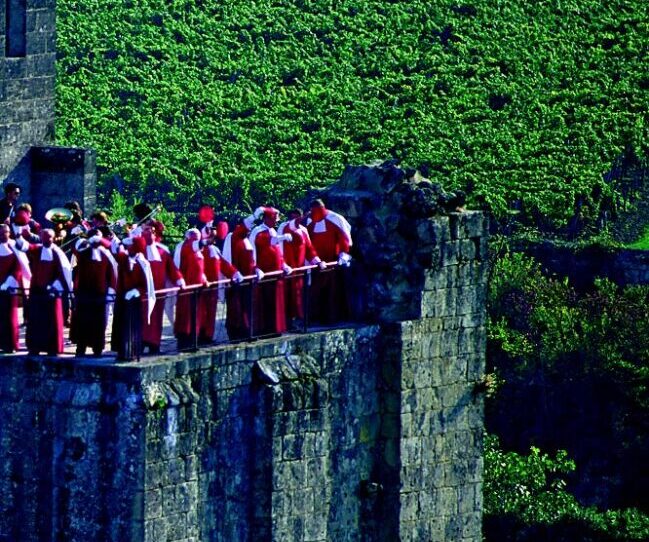 A historic vineyard, proud of its traditions until it seemed to be stuck in a mediocre routine for a long time, Saint-Émilion has reinvented itself to offer the most glamorous of the world’s great wines. En Magnum tells the story of a singular wine with many twists and turns

of seduction, that of luxury.

CHEVAL BLANC IS FOR SALE Now open to the world, the village of Saint-Émilion was attracting wine lovers and the curious. More and more tourists were flocking to visit its rich architectural heritage and taste its wine and macaroons. Its worldwide fame reached its peak with the sale of Château Cheval Blanc, one of the most famous estates in the whole of Bordeaux and owned for a century and a half by the Fourcaud-Laussac family. A duo acquired it in 1998. The Belgian financier Albert Frère and Bernard Arnault. The arrival of the boss of what was rapidly becoming the world’s leading luxury group, LVMH, marks the beginning of a new period in the life of the appellation. Wealthy investors from all walks of life were attracted by the presence of the French businessman and sought out vineyards. The closed world of Saint-Émilion was deploying its capital with open arms. Most of the properties, which were still managed by families, became part of the world of big business. The whole of the vineyard and wine industry became more professional. The estates invested massively, began to build huge cellars designed by famous architects, hired brilliant young oenologists and agronomists to take charge of the technical side of things, and sought the advice and analyses of brilliant consultants such as Rolland, Derenoncourt, Dubourdieu, de Boüard and later Thomas Duclos. The city opened up to mass tourism.

This was a decisive moment in recent history, involving fundamental economic and structural changes. After a long struggle, Alain Vauthier took over at Ausone in 1997. The self-made man Gérard Perse arrived in Pavie in 1998. Both immediately signed successful wines which became stylistic references for the appellation. Jean-Luc Thunevin explains that he saw the arrival of “competitors who were not there to make up the numbers”. In view of the 2006 and 2012 classifications, the estates were reacting to one another’s desire to make the greatest wine possible. The importance of terroir, which had been somewhat put aside during the predominance of the Parker taste, was back in the spotlight. The general and technical management of the vineyards was evaluating issues linked to growing practices, which were at the heart of the market’s expectations. Research into geology was pushed further, historical terroirs were reconstructed, remote areas were cleared, and plots of land were broken up and cut up to the extreme. The Burgundian model was established. François Despagne, owner and winemaker of Château Grand Corbin-Despagne, comments on this change in mentality: “Making wine here has become a matter of passion. In the past, people were not involved and did it by default. Nowadays, that’s no longer possible, we might as well sell the property. For the last ten years, you can feel that the appellation is always questioning itself. There is more passion than in our parents’ generation”. As the number of historic families lessens, the newcomers are more involved and put themselves at the service of the wine. “Here, we get caught up in the game. After a while, we like it, we like competing with such spectacular products and such talented winemakers. The people who come fall in love with the appellation. All these people meet and live together, on the spot, in the chateaux, in the village. The properties that work best are managed by people who are viscerally attached to the village.” The arrival of all these foreign investors has given Saint-Émilion a new lease of life. They have come to compete with the historical families on their land and have contributed greatly to the wine’s reputation and to making the appellation what it is today. Less obvious, their involvement in the life of the village is more difficult to measure. If mass tourism has somewhat stifled the former authentic and local life, some also regret the disappearance of the forms of collegiality that made the appellation great, embodied triumphantly by the Jurade de Saint-Émilion.

A new parameter has entered into the permanent ebullition of Saint-Émilion. The climate and its transformations. During the 1990s and especially the 2000s, global warming combined with innovative growing practices led to the end of chaptalization, and then to an increase in the degrees, particularly for the early Merlot grape variety. At the end of the 2000s, the glorious and very opulent 2009 gave pause for thought. Some people remembered that their traditional grape varieties included a significant proportion of Cabernet Franc, sometimes even Cabernet Sauvignon. The “bouchet”, as Cabernet Franc is called in the region, had a paradoxical reputation, as one of those late-ripening grape varieties that, when ripe, give an incomparable brilliance and dynamism to the wine. In the past, good maturity happened one year out of five. Today, it is the opposite. Saint-Émilion has therefore entered a new phase of its metamorphosis, where the words “freshness”, “brilliance”, “purity” and “crispness” take centre stage. Beyond this umpteenth stylistic rebound, we must see here the permanent effort of a vineyard and those who embody it to reinvent themselves. This is no mean feat.

THE CLASSIFICATION IS DEAD, LONG LIVE THE CLASSIFICATION We could not close this feature without addressing the delicate issue of the classification. There is no question of us taking the risk of making predictions. Since 2012, one can get an idea of our appreciation by freely consulting all the scores we give to each of the wines involved in the process. Born of the revolutionary spirit of the appellations d’origine contrôlée, this classification was intended to allow, according to its original intention, the presentation of a solid hierarchy between the crus, which could be discussed every ten years according to the quality offered. The idea was all the more fabulous because, as Michel Bettane recalls, it was based on “the sportsmanship of a group of producers who agreed to submit the individual quality of their products to the judgement of the nation. This is in contrast to the unmoving rankings of the other prestigious Bordelais sectors”. Without doubt, this starting point has been undermined by the sudden rise of Saint-Émilion and the discovery of its strong potential for development. Saint-Émilion is a complicated appellation. Political issues have shaped its identity. For example, the links between the parishes which depended on the village church and the long-standing exclusion of those which did not depend on it resulted in the rejection (until the last classification) of all the peripheral crus. Among all the possible reasons for the tensions and unspoken words that each new classification brings to the fore, the division of the first geographical area of the appellation probably frustrated the most powerful and oldest families of the village, who were sceptical about the inclusion of all the other communes in the decree. Michel Bettane explains: “They took advantage of this first classification to make a ranking within the Grand Cru appellation. Only the appellation’s best terroirs could claim a rank of classified growth. However, with the exception of Larcis Ducasse, located in the extension of the Pavie hillside, all the first classified growths promoted in 1955 are located in the commune of Saint Emilion”. This is a situation that is not well digested by all the other crus who wanted to reach the top ranking. However, for the majority of the appellation’s producers, the attraction of this classification has never been denied, even at the height of the legal crises. Of course, the recent withdrawal of the candidatures of Châteaux Ausone, Cheval Blanc and Angélus – three first classified growths A – raises doubts. However, the classification has less weight in its wing than one would like to believe. The will to produce great wines and the valuation that accompanies them are still very much linked to the possibility of being promoted and to its revision principle. We owe it, in part, the exceptional quality of the wines over the last ten years. How else to explain this emulation bringing together so much talent, winegrowing know-how, oenological competence, commercial intelligence, business strategies, genius consultants and brilliant agronomists? At the end of the day, Saint Emilion is a reflection of the French society, torn between a common rural heritage to be defended urbi et orbi and the ever-growing individual freedom to undertake and succeed. Let us pray that this uncommon genius will not be lost in the lowly work of procedures and under the deceitful blows of those who are unable to grasp its greatness. It contributes to making the civilisation of wine a living civilisation.