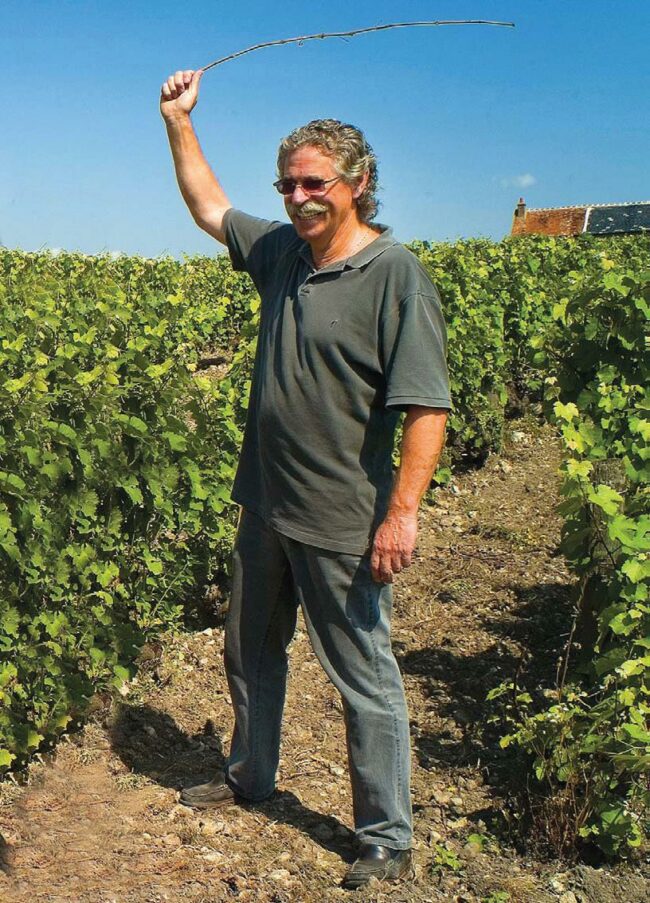 Everyone knows this moustachioed, soft-spoken, friendly, talented man. And everyone loves his wines. We dug in for more precise information rather than simply enthusiastic.Since the beginning of the deconfinement, Jacky Blot has been one of the most sought-after winemakers in France. All lovers of Chenin and Cabernet Franc make the pilgrimage to the banks of the Loire to stock up on increasingly desirable cuvees. “Between June and October, we doubled our number of visitors, which compensated for our lack of export sales last spring.” This former well-known and recognised wine broker is thus reaping the benefits of the soaring reputation of all his wines. By buying vines in Montlouis at the beginning of the 1990s, this moustachioed man with the look of a First Empire grunt became a true leader. Convinced of the potential of the Loire terroirs, he drew inspiration from his visits to the French vineyards to produce organic wines, which he wanted to grow pure and without residual sugar, undertaking ploughing and manual harvesting, practices that were not common at the time. As for the dry wines in particular, Jacky Blot has prospects here too, since he works without malolactic fermentation, with barrel fermentations and maturing in very advanced barrels. Today the estate has 25 hectares of Chenin on the banks of the Loire and Cher rivers, including 5 hectares in Vouvray. For obscure administrative reasons, his cellar being on the wrong side of the river, the estate’s Vouvrays no longer bear the name of the appellation. Over the years, Jacky Blot has refined his style. His whites are shooting stars, straight as an “i”, with chiselled acidity and just the right amount of substance.

In Montlouis-sur-Loire, the finely smoked identity and mineral force go to a crescendo in les-hauts-de-husseau (ex-cuvée rémus) and clos-mosny, vigorous, invigorating, infused with a myriad of small, sparkling bitters. Bretonnière en vouvray presents an aromatic and mineral intensity. The clos-de-venise seduces with its frank attack, the mid-palate spreads beautiful exotic notes, a very persistent finish on guava and passion fruit. The climatic upheaval has made it possible to make high quality sweet wines from the “Les Loups” and “Romulus” vintages of 2015, 2017, 2018, 2019 and 2020. The quality of the 2018 and 2019 is on a par with the estate’s reputation, and the quartet of bubbly cuvées tasted this year are breath-taking. Triple Zero, a natural sparkling wine created in 1993, sets the tone for the best bubbles in France, and the 2008 extra-brut vintage does not shy away from some of the Champagne cuvées.

Jacky Blot also has 16 hectares planted in Bourgueil. Overlooking the alluvial plains, the vineyard has developed on one of the most beautiful clay-limestone slopes of the appellation, facing due south. The stylistic evolution is notable, with the 2014 vintage, a year in which the richness of the grapes allows for more infusion than extraction. A lesson learned for all the years that followed, the wines gain in nuance and complexity, with sensual tannins without equivalent in the appellation. Here, the plots are carefully selected according to the Burgundian model. The pied-de-la-butte is delicious, the haut-de-la-butte is more complex and the mi-pente is sensual and structured. For the moment, this is the most accomplished of the estate’s crus. Perrières, matured in oak, refines its ageing from one vintage to the next with a perceptible identity in the intensity of the finish. The Coteaux-du-levant cuvée, with its gourmet flavour, makes its appearance with the 2018 vintage. It consists of two hectares in the east of the appellation, facing south, with 50-year-old vines.